Here comes the second version of scene number 5, which contains the first shot of the robot. Except for some small details (and sound of course) this scene is finished. Hope, you like it!

It took a lot of time to create an After Effects setup, which allows me to handle every shot without doing redundant steps. But now its finished and working on the different shots can start! 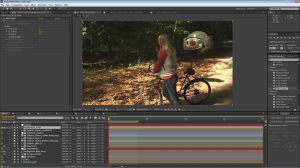 Today I would like to share the first version of  scene number 5, which contains some shots of the drone. Its not the final version and i would like to focus on the problems and ToDos of this version I noticed after viewing it a few times. But at first have a look at the scene:

Now lets view a few stills and their individual problems: 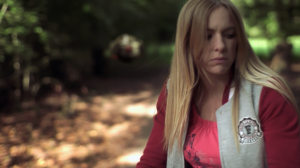 I think the drone fits well into this shot, mostly because of the blurred background. The appereance is a bit sudden, so a smoother animation and bit-by-bit show-up is required. 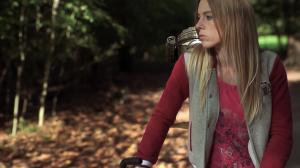 Forgot to apply an depth-of-field filter to the drone layer, so the drone and the shadow are much to sharp. 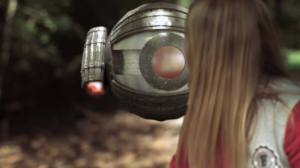 Four things about this shot I don’t like.
1. The exhaust gases are blurred to much and show to much color, so more distortion details and less red color would improve it.
2. The whole composition lacks in depth, the drone seems to be very flat. I think its because Lea in front isn’t blurred enough, which causes non-logical DoF.
3. The iris needs more details or reflections.
4. Color and contrast differences between footage and CGI, I’m going to investigate this topic. 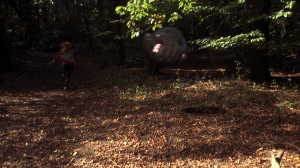 Again the shadow has to be tweaked. Also the animation seems a bit to fast.

All in all I think it is okay for a first version, but animation as well as compositing can be improved. Because I have worked in a trial-and-error way up to now, I am going to read some literature about compositing before I’ll continue. I’m also looking forward to get some feedback from different people, to get a better sense of what I have to improve.